From soaking facilities with ADA-compliant lifts to pools with ramps, handrails, and benches, we found a soothing Colorado hot springs experience for nearly every ability and mobility. 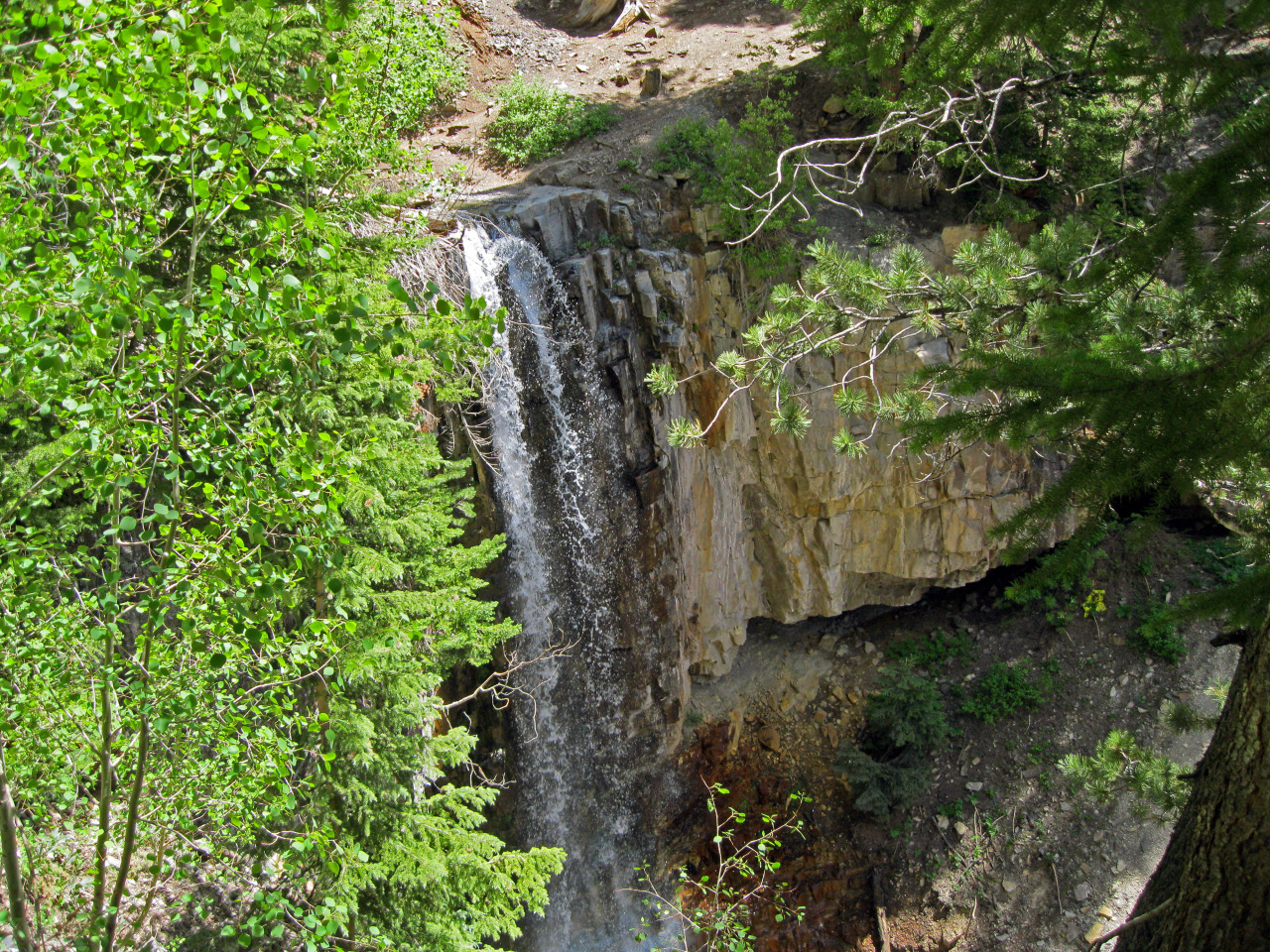 Cascade Creek filters through boulders in tiered horsetails above the trail, then freefalls in a dramatic plunge at Upper Cascade Falls, Ouray, Colorado. Photo by Susan Joy Paul.

I visited the Twin Peaks Lodge and Hot Springs, Ouray, in late May, and managed to show up right around check-in time. Duane Ennis, the front desk manager, was as busy as you can imagine, checking in guests for the Memorial Day weekend. I hung out in the lobby, wondered how much the place had changed over the years, how many guests had come through those doors and stood in that lobby, since John Wayne had stayed here while shooting True Grit.

For anyone who’s never worked in the customer service business—at a motel, a hot springs, or anywhere else—please know that a lot of work goes on behind the scenes, to make the places we all enjoy so much, so cozy. This was evident at just about every hot springs I visited on my tour, doing research for a book I was writing about Colorado’s hot springs, and it was no different at the Twin Peaks Lodge. Duane did it all with a smile, though, and I was grateful when the steady influx of motel guests slowed, allowing him time to give me a tour of the grounds.

The soaking and swimming pools at Twin Peaks were clean and neat, bordered by manicured lawns and rock gardens, but standing at the west end of the swimming pool, or just about anywhere else on the property, it was hard to focus on anything but the views. The lower flanks of Hayden Mountain bordered the south, with the snow-capped summit of Abrams Mountain sparkling beyond, in the sunlight. In the eastern skies—rising high above the tiki bar—stood the Amphitheater, a striking natural formation carved into the rock and resembling a giant glacial cirque, but believed to have been formed by a volcanic explosion. All around, steep, ledgy rock faces rose straight up and scraped the sky. Ouray is known as the “Switzerland of America,” and standing at the end of the pool, it was easy to see why. Duane had a look on his face I’d seen before, on the faces of many Colorado hot springs staff, that “I can’t believe I work here” look.

“In the summertime,” he said, “they set off fireworks up there in the Amphitheater. We have the best views.”

Duane talked low, he talked slow, and he didn’t talk too much. The Duke would have approved. I closed my eyes and tried to imagine it: sitting there at the tiki bar under a night sky, surrounded by those towering peaks, fireworks echoing from the Amphitheater south, through Uncompahgre Canyon, while twinkling white and gold stars mingled with the bursting colors of the July 4th celebration. A cool drink was in my right hand, and an even cooler John Wayne sat to my left. I decided it would be nice, darn nice, but the views that day were pretty nice, too. Really, Pilgrim, they were the best.

Touring Colorado Hot Springs (April 2012, FalconGuides) introduces you to 32 Colorado hot springs, with directions, maps, and the details you need to plan your hot springs vacation.

The Memorial Day weekend is lovely in Ouray, and as busy as the hot springs were, I was glad to have chosen it for my visit to the town. This was the warm-up for the summer tourist season, and all the businesses—including The Historic Wiesbaden Hot Springs Spa & Lodgings—had put their best faces forward. The site smelled of freshly-cut grass, the big pool sparkled, and the great room off the lobby glowed with springtime sunshine.

I roamed the hallways, peaking into rooms and lingering in the vapor cave, a rare treat on my tour of the Colorado hot springs. Proprietor Linda Wright-Minter soon joined me and gave me a formal tour of the facility, pausing to straighten a picture, tighten a bed linen, and skim an apple blossom from the soaking pool. Guests greeted her warmly as we walked the grounds, treated her like an old friend. Linda stopped to chat with each one, and inquire into their satisfaction. They were all pleased today, happy to be vacationing at the Wiesbaden again.

“I wish,” she confided, “I could remember all the names. Over the years there are just so many.”

The words slid smoothly off her tongue in an accent I couldn’t quite place, distinctly southern, maybe Texas with a slight Virginia twang. It made talking to her a pleasure, no matter what the conversation, and she’d owned and operated the facility for many years and had some interesting tales to tell. We settled into the great room, where Linda took a seat on the big couch, tucked her legs under her long denim skirt, and smoothed the flowing white mane of hair away from her face, exposing stately, Sarah Jessica Parker-esque cheekbones. Hot springs take on the personalities of their owners, and sometimes it works the other way, but somehow they always seem to reflect each other. In any case, the casual elegance of the Wiesbaden was echoed in Linda, and she in it.

I asked her about the televisions and telephones, which, although discreet, seemed slightly out of place in such an historic rooming lodge. She explained that she had put off adding them for a long time, but that, before cell phones became so popular, some of the high-brow and high-profile patrons—particularly the senators and other government officials—continuously received phone calls to the front desk, at all hours. And while the guests always told her to keep the place “just the way it is,” Linda believed they appreciated the amenities, so they could call home on the phones, and keep up on the news on the TV sets. I asked Linda about the senators and other well-known guests, and she told me the story of a young actor from New York City who spent some time at the Wiesbaden.

“I asked him what he was doing on Broadway, but he said he was just a TV actor, and working on a show called Law & Order. Well, I hadn’t heard of it, of course, I don’t have much time for TV. He seemed surprised, maybe even a little disappointed, but he came back later and asked me if I’d heard of another show called Sex in the City. I hadn’t heard of that one either. I told my friends about him; they said he’s a big celebrity.”

I told Linda he was a big celebrity, and that perhaps the only person who might enjoy telling that story more than her was Mr. Big himself, actor Chris Noth. She clapped her hands together, smiled brightly, and said, “That was his name!”

The Wiesbaden is a step back in time, but a welcome step, a lovely step, a casual, elegant step. I left in agreement with the guests who say, “Keep it just as it is, Linda, just as it is.”

(April 2012, FalconGuides) introduces you to 32 Colorado hot springs, with directions, maps, and the details you need to plan your hot springs vacation.

I arrived a bit early to Box Canyon Lodge and Hot Springs in Ouray to find the front desk manager deep in conversation with a group of women—guests of the lodge and locals, it seemed—about hiking boots and blister prevention. Joanne Salette told me to help myself to the light continental breakfast she had laid out for her guests, while I waited for the owner, Karen Avery, to arrive. The lobby ladies were soon off on a hiking adventure, and I had some time to chat with Joanne. I learned that she had climbed all the Colorado 14,000-foot peaks—the “14ers”—some of them multiple times, and had the kind of knowledge and demeanor that would attract the attention of both newcomers and veterans in the sports of hiking and mountaineering. The peaks were one of my passions, but I was here for the hot springs, doing research for a book, and so that conversation would have to wait.

I wandered the grounds a bit, taking advantage of the early hour to get some photographs, and climbed the outdoor redwood staircase behind the lodge. Natural hot springs poured from the hillside there, and platforms in the terraced decking were set with sunken hot tubs filled with the steaming hot springs water. It was there that I found Bill, the solitary morning soaker. He was from New Mexico, he said, and had lost his wife a few months prior. It had been a devastating experience for him and he had locked himself up in his home afterward, until his friends convinced him that he needed to get out, and so he had returned to one of his wife’s favorite places, the Box Canyon Lodge. There were so many memories for him here; it was a place they had enjoyed together year after year, he told me. She was with him now, he felt, and was glad that he had come here to soak in the hot tubs and relive his happiest times with her. I knelt at the tub to pay my condolences. We both cried a bit and then he smiled and apologized for his grief and we talked about the hot springs.

I returned to the lobby and was on my second cup of spiced tea when Karen showed up, and gave me a complete tour of the place. She and her husband, Rich, had put a lot of time and effort into the Box Canyon Lodge, maintaining the buildings and property, while preserving the natural beauty of the site. It was Rich who had added the lovely benches and swings to the scenic perch high above the hot tubs. Karen was quite the green thumb, I found, as she showed me pots and flats of greenery she was growing about the place, all under the watchful eyes of some strategically placed garden gnomes. After our morning walk, Karen—an expert on the area—spent some time going through a bunch of Ouray brochures with me, circling the best hikes, places for wildflower viewing and leaf-peeping, and nearest ice-climbing routes. We returned to the lobby, and there was a fresh group of locals, lodge guests, or maybe a mixture of both, huddled at Joanne’s counter, discussing carbonite trekking poles.

The ladies at the Box Canyon Lodge know things. And I began to understand why the lodge is more than a place to relax and get away from it all; it’s also a place full of life, and a place to live life, where the seeds of fond memories might be sown. It’s a gathering place where locals and out-of-towners blend together to talk about hot springs, and hiking, and mountains, and blisters, over spiced tea and honey, but just for a while. Soon enough they are off, and I was too, knowing what was out there and not wanting to miss any of it.

(April 2012, FalconGuides) introduces you to 32 Colorado hot springs, with directions, maps, and the details you need to plan your hot springs vacation.